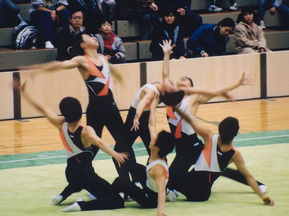 Men’s rhythmic gymnastics originated in Japan. Apparently, the men of this country saw the continuation of the original Japanese tradition in gymnastic exercises with objects (rope, club, hoop). Long before the emergence of many sports trends that exist today in the land of the rising sun, exercises with all kinds of objects that help a Japanese man to improve body and spirit were especially popular. Even whole clans were created in which children from a very early age were taught to overcome their own physical capabilities: they developed flexibility, sense of smell and touch. The brightest clan in Japanese history is the Shinobi (ninja).

So, in 1985, at the World Cup in Tokyo, men took to the carpet for the first time to demonstrate their art. The spectacle, I must say, was unusual: young people in tight-fitting suits, masterly arching their bodies to the beat of the rhythmic music. The European spectators present in the stands on that day of the competition were extremely unhappy: the difference between the elegant plasticity of fragile girls and the acrobatic sketches of men throwing sticks up was too great. The Japanese, on the other hand, were overjoyed.

In those early years, the sports community did not believe that something would come of it, the image of a plastic man in tights did not fit into the practical brain of a European. In addition, the first appearance of men on the court of the general public showed that their skills still bear little resemblance to true rhythmic gymnastics, since in performances acrobatics prevailed over the emotional and plastic component, which are the hallmark of this sport.

However, expert skepticism did not discourage Japanese enthusiasts from developing their skills. Sports schools began to open across the country, recruiting boys to rhythmic gymnastics groups. Over time, a methodology has been developed that helps athletes equally master acrobatics and choreography. Japanese coaches have developed a competitive system adapted to the capabilities of men. The tournaments were first held within the walls of sports schools, between schools, and a little later they went out to the international level, because while the Japanese were busy developing this sport within the country, it turned out that China and Korea were also interested in this idea.

So slowly but surely, the male branch of rhythmic gymnastics began to conquer the world.

Gymnasts began performing during the World Cups and World Championships held in this country. Moreover, a separate World Championship for men was established in Japan. At first, mainly representatives of Asian countries took part in it, and then Europeans, as well as Russians, began to get involved.

To date, the men’s competition program does not yet have general rules. The objects used during the performances are different from those used by women: a cane, a ring, a club, and a jump rope. The choice of such items is not accidental. Here you can see the Japanese tradition: a cane is a pole that was used in ancient martial arts; ring and mace – shield and sword. The jump rope is perhaps the only object connecting male and female rhythmic gymnastics, since visually there are two completely different competitions: the female sport is plastic, lightweight and elegant; male – athletic and belligerent, but at the same time, choreographically holistic.

The International Gymnastics Federation has not yet officially recognized this sport. However, there is still some progress towards the “legalization” of men’s rhythmic gymnastics. In the summer of 2009, at the Olympic Youth Festival in Helsinki, the men’s tournament was officially included in the competition grid.

There are also supporters of the male trend in the CIS countries. And, oddly enough, the role of the main activist in defense is Irina Viner, who sent her two grandchildren to the rhythmic gymnastics section (one switched to karate, and the other continues to practice). She believes that this sport has every chance to stand in the same rank with the existing Olympic ones, since there are plenty of prospects for improvement in this direction. Moreover, she predicts the development of a new methodology “Star Children”, according to which boys and girls from the age of three will do gymnastics together and then move to the rhythmic gymnastics sections. This technique, according to Wiener, will help improve the quality of training of young athletes, because children have an additional opportunity to show who is stronger (girls or boys).

In 2009, Irina Viner finally achieved the inclusion of an item on the development of male rhythmic gymnastics in the Charter of the All-Russian Federation. Now this sport is being introduced into school physical education lessons. And this means that in the very near future a network of sports schools focused on this sport will develop, a competitive calendar has been created, and so on.